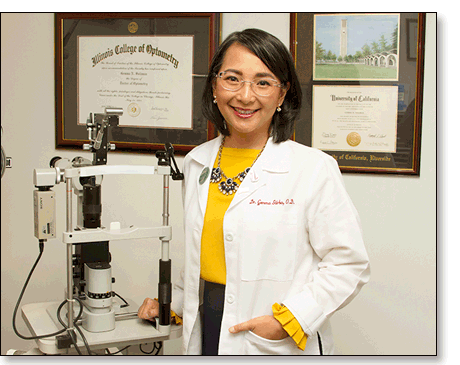 Dr. Gemma Stirba was born in the Philippines and migrated to the United States at the age of 14, where she resided in Oakland, California.

She received her Bachelor’s Degree in Biology and Neuroscience at University of California, Riverside in December 1999. During her college years, she worked as a laboratory assistant in a neuroscience research lab learning neurophysiology, neuropharmacology and excitotoxicity.

Dr. Stirba earned her Doctor of Optometry degree from Illinois College of Optometry in 2005. After her first year in optometry school, she was a recipient of the National Eye Institute Research Fellowship award and participated in a summer research training program at the University of California, Berkeley. She published papers in the Contact Lens and Anterior Eye journal and Optometry and Vision Science journal. Her clinical experience includes externships at Palo Alto VA Hospital in California, Illinois Eye Institute in Chicago, Illinois, Mid Florida Eye Center in Mt. Dora, Florida and Newington VA Hospital in Connecticut.

Dr. Stirba joined Killingly Eye Care in November 2009 as a part-time associate. She became a full time associate in January 2011.

Otherwise, please call our office during office hours for other inquiries